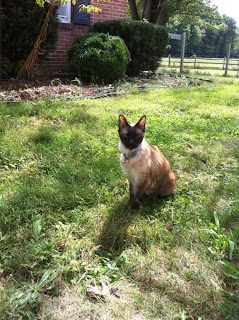 Sushi is an elder kitty with compromised health. He recently had surgery for gall bladder blockage and has a damaged liver. Sushi is also a healer. He will often aid his human when she is not feeling well. He will place himself on or around wherever she may be experiencing malaise. One of her concerns is that he will expend his energy to help her and this will drain him and take away from the healing he himself needs to stay well. Last December I was attending a Christmas party his human was hosting at their home. She (the human) informed me that Sushi had not been his usual active, voracious, and happy self and she was concerned (she has a "history" of losing her heart animals around winter solstice). She took me in to where Sushi and her other kitties were "hiding" during the party. I could see that he wasn't feeling well. I offered him Reiki, telling him he could partake, or not, whatever he deemed necessary. As soon as I offered, my Reiki "turned on" and I could feel Sushi soaking up the energy. The next day his human contacted me and informed me that he was doing much better and was back to his happy, bouncy, hungry self. 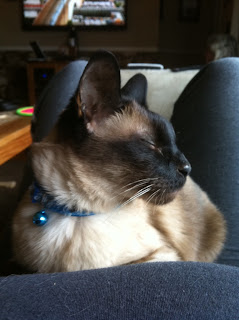 A couple of weeks later his human contacted me to tell me that Sushi was feeling unwell again and his energy was wrong. He was subdued and not very active, nor was his appetite as it usually was. As soon as she sent me a photo of him my reiki "turned on" again. I offered him distance reiki which he accepted. I explained to his human that there have been rather huge energetic shifts recently and as both a healer and a feline Sushi was likely feeling and tuning into those shift. Again, after the session, his human contacted me to let me know that he was greatly improved and back to his active, ravenous self. 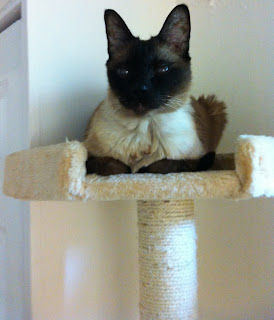 During the session I "asked" him if he would be interested in being attuned. I explained to him that if he is attuned he can pull from universal source and will not need to dip into his own reserves. I am excited to report that both Sushi and his human are interested in having Sushi attuned to Reiki and I will be attuning him within the next couple of weeks.
Posted by Unicorn Dreams Wholistic Touch at 23:51

Unicorn Dreams Wholistic Touch
I specialize in Equine, Canine, and Small Animal Massage and Reiki healing for all animals, including humans, both distance and in person. I seek to look at the whole in order to facilitate healing and am a firm believer in showing and teaching humans how they too can help partner with the animals in their care. Healing is a team effort and begins from the inside out, one must look at the whole of the being, not just the part. Of course, the journey doesn't stop here.. Learning is a lifetime endeavor and every day brings a new lesson. I continue to pursue certifications and studies into different healing modalities, including and not limited to aromatherapy, homeopathy, naturopathy, nutrition, and acupressure.