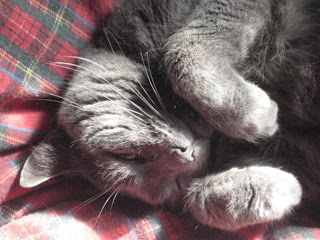 Storm is a very emotional cat and sensitive to the things going on around him. He tends to be aloof when things are not going his way or when he is feeling blue. His human told me that he had been keeping to himself and seemed to be in an emotional "funk." The dynamics of the home had tilted recently with the loss of 2 of the other feline family members, brothers, Paul and Silas. Since the last feline, Paul, crossed over I was told that there was no real order between the remaining 2 felines, Storm and Scout. Storm's human told me that she believes that the changes were a bit too much for Storm to handle. I initially went to their home to offer massage to the 4-legged inhabitants, when I approached Storm I could clearly see he was not interested in having body work (he "told" me he didn't want to be touched). I then opted to offer him Reiki, which he accepted timidly at first, then very strongly. I could feel the energy between us and Storm welcomed and soaked in all that he could. Later that evening his human contacted me to tell me that whatever happened between us changed Storm for the better. She said he has become much more relaxed, happier and engaged with the family. Since that session his human has been interested in offering energy to him and I will attune her to level 1. This was her first "true" experience with Reiki and she sincerely noticed a change and now wishes to share this with her animal companions. Her exact words, "I had never had any true personal experiences in or around Reiki until recently, but I am SOLD!!"
Posted by Unicorn Dreams Wholistic Touch at 23:39

Unicorn Dreams Wholistic Touch
I specialize in Equine, Canine, and Small Animal Massage and Reiki healing for all animals, including humans, both distance and in person. I seek to look at the whole in order to facilitate healing and am a firm believer in showing and teaching humans how they too can help partner with the animals in their care. Healing is a team effort and begins from the inside out, one must look at the whole of the being, not just the part. Of course, the journey doesn't stop here.. Learning is a lifetime endeavor and every day brings a new lesson. I continue to pursue certifications and studies into different healing modalities, including and not limited to aromatherapy, homeopathy, naturopathy, nutrition, and acupressure.